First, let’s clear up what the terms cause and effect mean.

Cause and effect is the relationship between two things when one thing makes something else happen. A cause is something that happens. As a result of that, an effect is what follows. For example, as a cause, if you spend a week lounging around munching on junk food all day, the effect is that you’d gain a couple pounds.

On the GED test, you’ll see cause and effect in two subjects: Reasoning Through Language Arts and Social Studies. There will be questions about finding the relationship between ideas in a text. One way two ideas could be related is cause and effect.

As an example, read this text based on information from the National Musem of Natural History**:

Unique to today’s global warming are the sources of heat-trapping gases and rates of change. Millions of years ago, heat-trapping gases were released due to a natural event. Huge eruptions that forced carbon out of rocks were followed by warming oceans that freed methane gas from ocean floor deposits. However, most modern carbon emissions come from burning fossil fuels (coal, oil, gas) for transportation and industry, and from certain chemical reactions (such as making cement) to create a greenhouse effect. Human-caused carbon emissions are setting the atmospheric stage for current and future warming.

From this passage, you can infer (assume or lift from the text): 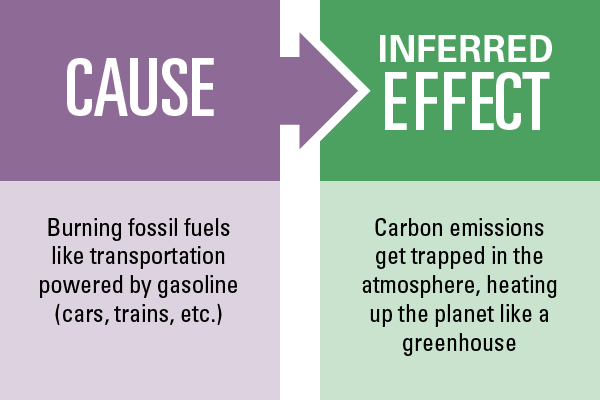 Here’s another one to practice some more. Read this excerpt from an article about women’s suffrage on History.com***:

“The women’s suffrage movement was a decades-long fight to win the right to vote for women in the United States. It took activists and reformers nearly 100 years to win that right, and the campaign was not easy…On August 18, 1920, the 19th Amendment to the Constitution was finally ratified, enfranchising all American women and declaring for the first time that they, like men, deserve all the rights and responsibilities of citizenship.”

From this passage, you can infer (assume or lift from the text): 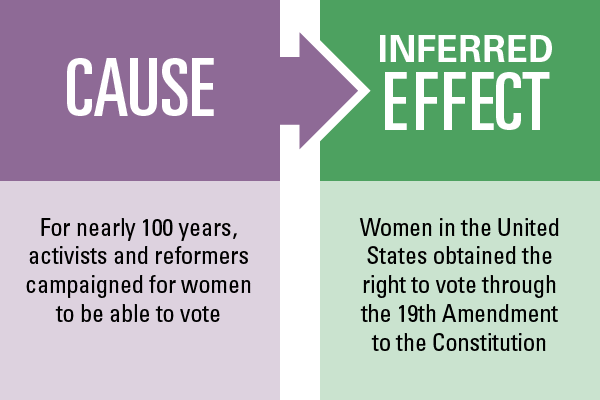 Cause and effect are part of everyday life. Learn more and practice for the GED test at the links below.