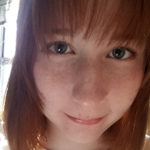 Jordan started her GED journey in September 2016 after deciding she wanted something outside of the traditional high school environment.

“I was in a center-based gifted program from 2nd to 8th grade, I was bored with traditional education and felt capable of graduating in my ninth grade year.”

“I was in a GED prep course, twice a week for 3 or 4 hours each day. It covered all subjects on the GED test and the class was very individualized and small. The teacher also gave us the GED Ready practice tests to see our progress in each subject.”

She had already made plans to pursue a degree related to digital arts and the College Ready scores gave her an extra boost of confidence about her academic and career goals.

“Because I took a digital arts class during my GED prep course I felt prepared for college level work.”

Jordan enrolled in John Tyler Community College to take core classes that she could use in a transfer to a four-year university for a bachelor’s degree. At the community college she was also able to get her Adobe certification after demonstrating her proficiency with Adobe Systems software for digital media.

She is now enrolled in Longwood University as a Graphic and Animation Design major. Jordan believes the GED program successfully prepared her for college and her future career.

“There’s a common stigma that the GED isn’t as good as a high school diploma and it is completely false. The GED is not a quick and easy fix, the tests are difficult and with the College Ready score levels it’s more accelerated.”