Did you know the GED® Science test has a 90% pass rate? You have a very good chance of succeeding if you have a basic understanding of scientific concepts and how they work.

Here’s what you need to know:

This question asks you to use the data presented in the graph to support a given conclusion about a vaccine and its relationship to chicken pox.

Varicella is a virus that causes the disease chicken pox. Medications are used to treat the symptoms of fever and discomfort associated with chicken pox. In 1995, a varicella vaccine was made available to people in the United States.

The graph shows the number of chicken pox cases reported in four U.S. states from 1991 to 2007. 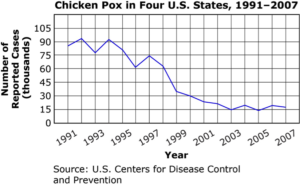 Which conclusion is supported by the data in the graph?

Science for the GED® Test

Fast Forward: Your Study Guide for the GED® Science Test